There is a record of Freemasonry in Brixham dating back to 1781, when The Lodge of True Love & Unity was formed, to the present day. There are very few organisations which are able to trace their origins back over a period of over 230 years, a reflection perhaps on the original foundations of the order which were laid all those years ago. No institution can boast a more solid foundation than that on which Freemasonry rests which since its inception has enjoyed royal patronage, the current Grand Master being his Royal Highness the Duke of Kent. The original old minute books recording the meetings are still in existence and are a real study in themselves. Some of the minutes were written by the horny hands of those who obviously gained their living from the land or sea. Others have the beautiful copperplate writing with flourishes pointing to the hand of the schoolmaster or solicitor, as was the practice in the early Victorian age.

The minute books provide a very real picture of life in those days, not only with regard to Masonic ceremonies and ritual but also as to how Freemasonry integrated with and contributed to life in the local community, a concept applicable to the present day.

The first lodge meeting in Brixham took place “in a private room on Brixham Quay” on 17th October 1781. By 1801 membership had increased and a new lodge room became necessary. A site was secured at Great Gate (opposite Rea Barn Hill and no longer in existence) on the spot where the ancient Alms House once stood. The yearly ground rent was 10 shillings (50p). A Masonic hall was erected with a lodge room and other rooms and apartments. It is understood that one of the other rooms was a schoolroom for local children. 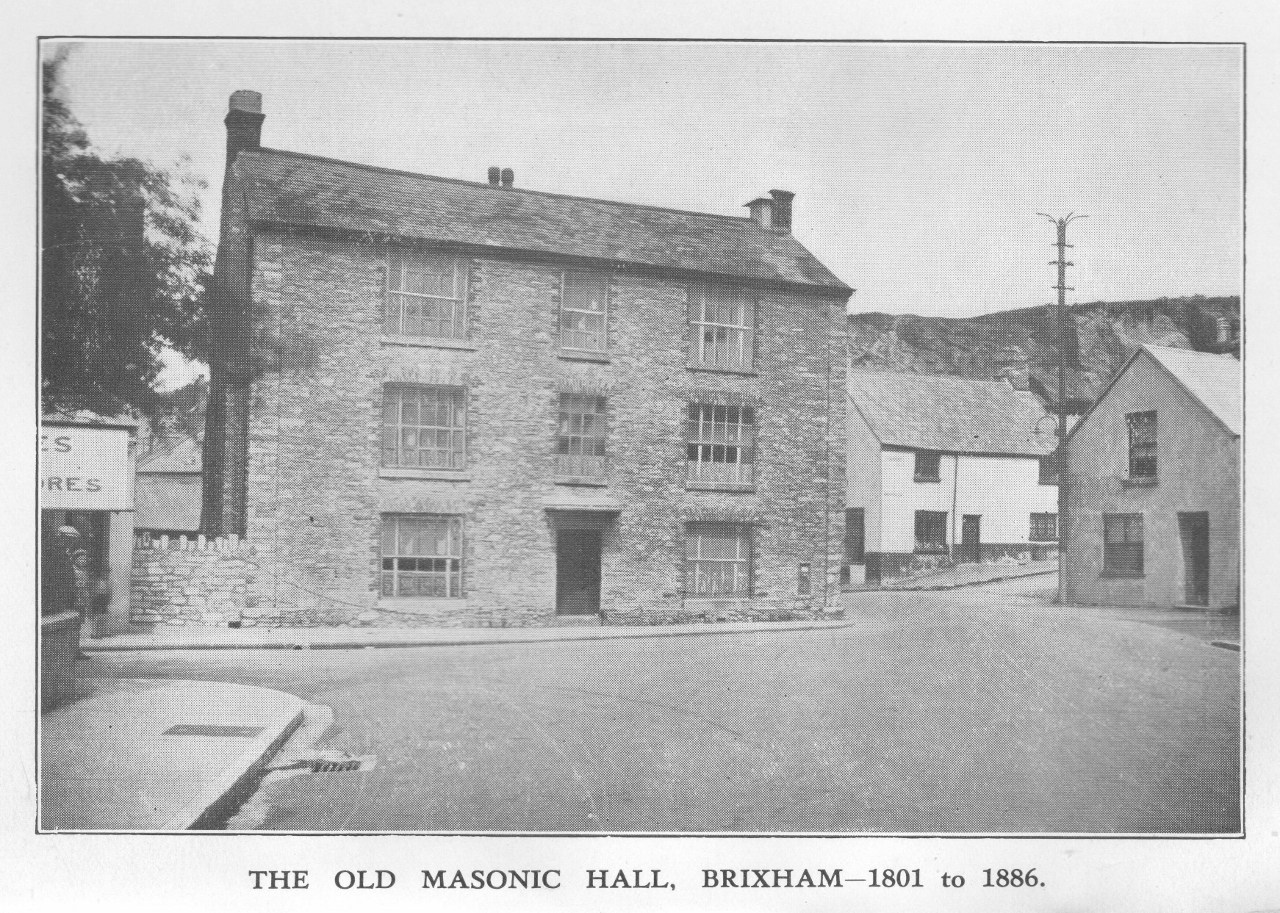 It is interesting to note that in 1804 Sergeants Tapper (aged 41) Rolls (46) and Lovell (45) of the Dorset Regiment were admitted members of the lodge. These men were serving in the garrison billeted at Berry Head Fort at that time in view of the threatened invasion of this country by Napoleon 1. This same year was the Jubilee of His Majesty King George III. Jubilee day was on 24th October and the Brethren processed to church from the lodge accompanied by the 3rd Regiment of Foot (The Buffs)

On 15th July the sum of £3 was voted from the Brethren of True Love & Unity towards the relief of French prisoners in Dartmoor Prison, an example of Masonic Universality, though at war with France, yet the sufferings of our enemies claimed our charity.

Richard Lavers was a prominent Brixham Freemason and presided over the Lodge as Master for a total of 20 years. On 24th June 1814, accompanied by the Revd. Robert Holdsworth, the Vicar of Brixham, Members of the lodge processed to Brixham Quay where Richard Lavers laid the foundation stone of the new Chapel of Ease. This is reported as being duly appreciated by the inhabitants of Brixham in the most enthusiastic manner.

An entry into the minute book at the end of 1840 indicated that the brig ‘Desir’ of Marseilles was wrecked in Torbay on the night of 10th December  and that the Master of the vessel, Bro. Henri Martin, was a visitor to the lodge on 28th December.

Farnham Maxwell Lyte the youngest son of Henry Francis Lyte was born at Burton House, Burton Street on 10th January 1828. Farnham was much admired in Torbay circles in his younger days. He was a successful man and was elected Master of True Love & Unity in 1851 at the unusually early age of twenty three.

The Great Gale which occurred on 14th January 1866 was a significant year in Brixham’s maritime history. Many vessels were lost, the biggest impact being to the fishing industry upon which Brixham relied so heavily. Freemasons from as far afield as Somerset contributed to The Brixham Fund for Destitute Sailors. Local Freemasons were also involved later in the year when cholera appears to have attacked the town. The sitting Magistrates used the lower room of the lodge premises during the period,  when their room at Higher Brixham was required for cholera patients.

The minutes at this time were presented in a much better form and were much more detailed, although mainly concentrating on Masonic matters. The next significant date was 21st September 1885 when it was agreed that a new site for a Masonic Hall be purchased. The building was built for a total of £350 and consecrated on 20th January 1887. That same building is in use today.

On 19th December 1910 hearty congratulation was sent to Bro. Albert Gempton for his heroic action in leaving his vessel (during a great gale of 16th December) with his young son on board, to try to save the lives of two lads on another vessel; it expressed the pride of the community at his courage and pleasure at the success he achieved.

In 1914 the Great War broke out and 62 Brethren of the Lodge saw active service, including The Rt. Hon. Lord Churston who was Master in 1897. Of these Brethren, 5 made the supreme sacrifice, William Ash (Master 1913), John Burman, Elbirt Campion, Walter Stamp and Silvanus Worth. A brass plaque commemorating these Brethren is attached to the wall of the Temple near to the Secretary’s desk. The Lodge appears to have been fortunate in that no Brethren are reported as having lost their lives during the Second World War, although again many saw active service.

In 1982 the Lodge celebrated its Bi-Centenary and on 30th March that year a special Anniversary was held at the Palace Hotel Torquay.

At the library in Brixham a stained glass window was commissioned to celebrate the town. On a plaque beneath the window The Lodge of True Love & Unity is listed as one of the organisations having contributed to its cost.

Freemasonry has actually been active in the community for almost three centuries, both in the practice of Charity in its various forms and in the contributions that generations of men, who happened to be Freemasons, have made to the history and development of their particular communities. During this period Freemasonry and individual Freemasons were visible and well known in the community.

For a period of 40 years from the late 1930’s Freemasonry gradually turned inwards, continuing to work within the community but actually withdrawing from the public consciousness and allowing the mythology to grow.

Up until fairly recently the activities of Freemasons within the community have been kept fairly much within the organisation and this has caused many wrong assumptions to be made about the order. Present day Freemasons of Brixham have been and are involved in public spirited activities by either offering service in kind or financial assistance. Among those organisations benefiting from their charitable attitude are the Royal National Lifeboat Institution, Royal National Mission to Deep Sea Fishermen, Grenville House, Brixham Sea Rangers and Brixham Swimming Pool to name but a few. Since 1994 The Lodge of True Love & Unity has donated directly to over 30 charities within Torbay, the majority to Brixham organisations.

From its earliest days Freemasonry has been involved in charitable activities and since its inception it has provided support for many widows and orphans of Freemasons as well as others within the community.

Freemasons are a unified body representing a microcosm of society, reflecting many disparate backgrounds but united in a belief that fellowship, integrity and charity are the pillars on which the community stands.

All monies raised for charity are drawn from amongst Freemasons, their families and friends, while grants and donations are made to Masonic and non-Masonic charities alike.

Freemasonry has an enviable record of providing regular and consistent financial support over long periods while at the same time making thousands of grants to local charities, appeals and projects throughout England and Wales each year. The personal generosity of freemasons and the collective fundraising efforts of almost 8,000 lodges nationwide will continue to determine the contribution Freemasonry makes within the community.

Many books have been written on the history of Freemasonry and are readily available to the general public. Freemasons are proud of their heritage and happy to share it.