There is a record of Freemasonry in Brixham dating back to 1781, when The Lodge of True Love & Unity was formed.  There are very few organisations which are

able to trace their origins back over a period of over 230 years, a reflection perhaps on the original foundations of the order which were laid all those years ago.

The first lodge meeting in Brixham took place “in a private room on Brixham Quay” on 17th October 1781. By 1801 membership had increased and a new lodge room became necessary.  A site was secured at Great Gate (opposite the bottom of Rea Barn Road and no longer in existence) on the spot where the ancient Alms House once stood.

The present Masonic Hall was built in 1886 and is located in Church Hill West, Brixham.

Brethren and partners of True Love & Unity Lodge joined Courtland Lodge, Paignton for a wonderful Sunday lunch at the Redcliffe Hotel, Paignton at which a special Teddy Bear was presented to a very special little girl.  What a lovely photo of Millie with Dad and Teddy. 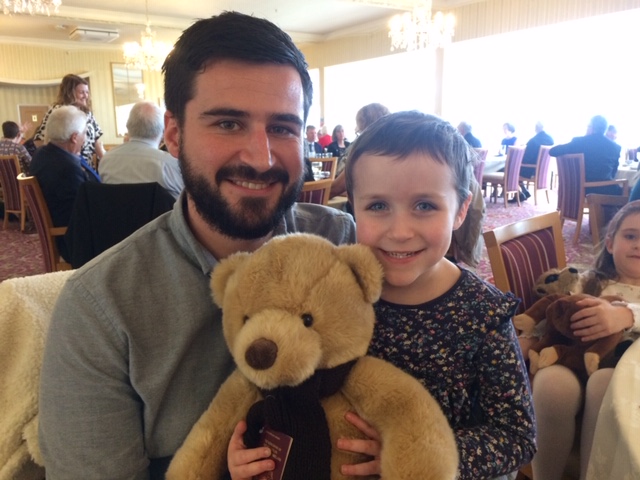 Teddies for loving care started in the Province of Devonshire in 2008.  It is an ongoing project which Freemasons finance to give every child who enters A&E or is admitted to hospital a free teddy bear.

The first hospital to receive teddies was Torbay, followed by the Royal Devon and Exeter then Derriford in Plymouth then finally North Devon District Hospital in Barnstaple. The teddies were then given to Little Bridge House, the Children’s Hospice, also in Barnstaple.

It was a slow process to start with, to get the ward staff to present a teddy to every child, but they became used to the idea! The medical staff use the teddies to demonstrate the treatment they need, and as “it didn’t hurt teddy” it wouldn’t hurt them either! Recently a radiologist commented that she has probably “X-rayed” more teddies than children in an effort to demonstrate that there is nothing to fear from an x-ray. This approach helped to calm the child down, as well as the parents. Being in hospital can be a very scary experience for a small child, especially if they are feeling really unwell.

A telephone call was then received from the Judges at the Crown Court, to ask if we would consider giving a teddy to a child who was to be adopted. This was agreed, and we now also supply teddies to the Crown Courts in Exeter and Plymouth.

Since then a total of eleven outlets have been established and we now give bears to children at the audiology department Derriford in addition to the A&E department and to the Research Innovation and Learning Department (RILD) at the RD&E hospital who deal with diabetes in children. Within the last 6 months bears have also been delivered to the Cumberland Centre in Plymouth which is a local A&E unit. These bears are very well received and the last delivery raised a cheer from the nurses. Parents cannot believe that their child is permitted to keep their bear on discharge.

To date over 55,000 teddies have been purchased, and this is to say a huge thank you to everyone for supporting the scheme. We are spending £1000 per month to keep up with demand.

DO YOU HAVE YOUR TEDDY BEAR BADGE?
For further details please contact:-

Email This email address is being protected from spambots. You need JavaScript enabled to view it.